At the meeting, The Vice President and the Commissioner of Police of the Singapore Police Force discussed potential areas of cooperation, particularly in capacity building and creating a police force that is focused on the community. They also agreed to share acquired knowledge and experience after recognising the parallel difficulties encountered by both nations' police forces.

The Vice President deliberated on the long-standing bilateral relations between both countries and thanked the Singaporean government for its continuous support and assistance to the Maldives Police Service throughout the years.

The Vice President was accompanied by Foreign Secretary at the Ministry of Foreign Affairs, Ahmed Latheef and Commissioner of Police at the Maldives Police Force, Mohamed Hameed. 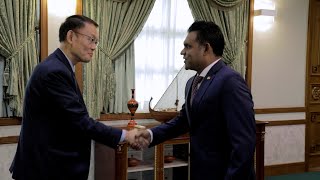