President given a warm welcome on his return back home. Visit to New York has enhanced Maldives’ international status – President Nasheed 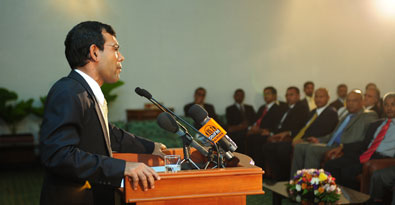 President Mohamed Nasheed has, this evening, returned to Malé after concluding his visit to New York to attend the UN Summit on Climate Change, the 64th session of the UN General Assembly, and the high-level summit of Alliance of Small Island States (AOSIS).

On arrival to Male, the President was given a very warm welcome. The crowd chanted messages of congratulations and presented a garland of flowers and globe for his achievements in New York and for been chosen by TIME magazine for its Heroes of the Environment 2009 list.

Earlier, on arrival at Male’ International Airport, the President was greeted by the Vice President, the Special Envoy of the President, Ministers, State Ministers and other officials of the Government.

Afterwards, the President gave a press conference at Hulhulé, The President briefed the media on his visit to New York and Washington, DC.

The President said his visit has opened doors for the Maldives to represent itself on the international arena on the major issues of the day.

President Nasheed said his proposal for climate change negotiations, formally submitted to the AOSIS climate summit, in which a more positive list of actions was emphasised instead of a ‘prohibition list’, was well received.

He added the idea of such a ‘survival kit’, which includes everything that we must do in order to combat and address climate change and its effects, was an idea that, could be sold to the world.

At the press conference, the President also took questions from the media. The questions were mainly on his visit to New York and Washington, DC, and on the Maldives’ decision to renew relations with the state of Israel.

He said the Maldives’ would use its relationship with Israel towards the establishment of a Palestinian homeland.
SHARE:
Copied!
LATEST FROM THE PRESS OFFICE