The President and the Cambodian Prime Minister deliver a joint statement H.E. President Ibrahim Mohamed Solih and the Prime Minister of the Kingdom of Cambodia, Samdech Akka Moha Sena Padei Techo Hun Sen, on Monday afternoon, delivered a joint statement at the President's Office. Samdech Techo Prime Minister Hun Sen is in the Maldives on an official visit at the invitation of President Solih.

In their statement, the President and the Prime Minister shed light on the common challenges and concerns facing the two countries, shared similar ideas and concepts to overcome them, and stated that prioritising international cooperation and goodwill with neighbours in the hopes of reaping the benefits of a strong partnership was the way forward. During the statement, Samdech Techo Prime Minister Hun Sen highlighted the importance of improved bilateral relations, trade, and cultural relations between the two nations.

Citing that people-to-people contact remains an integral part of any bilateral relationship, President Solih expressed satisfaction with the agreement on easing visa facilitations, which allows a 30-day on-arrival visa for travel between the two countries. The President also expressed interest in improving trade ties and highlighted the opportunity for Maldivian importers to tap into Cambodia's rice and other agriculture sector markets. Cambodia exports rice and other agricultural products such as maise, peppers, dried cassava, cashew nuts, and fruits.

President Solih and Samdech Techo Prime Minister Hun Sen also discussed bilateral trade opportunities with an emphasis on importing other commodities produced in Cambodia, such as garments, travel goods, and wood products, to the Maldives. At the same time, they added that Cambodia would consider importing canned tuna and other fisheries products from the Maldives. The President highlighted that diversifying imports to multiple markets would reduce the prices of staple foods, enhance food security, and provide more choices to consumers.

The President also outlined the exchange of six bilateral agreements signed today, expressing hope for a renewed commitment to greater cooperation, especially on international issues of mutual interest. He particularly emphasised the engagements at the United Nations (U.N.) and other international organisations, working together towards achieving the Sustainable Development Goals (SDGs), common perspectives on climate change, and issues relating to international peace and security.

In conclusion, having laid the foundations and established key components to sustain and elevate the partnership, both leaders expressed hope for improved cooperation and friendship between the two nations in the years to come. 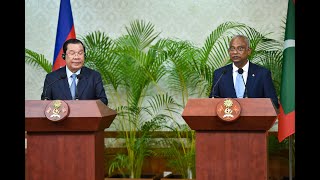