The government officially welcomes the Cambodian Prime Minister to the Maldives The government of the Maldives held an official welcome ceremony on Monday for the visiting Prime Minister of Cambodia, Samdech Akka Moha Sena Padei Techo Hun Sen. He arrived in the Maldives on Sunday morning on an official visit at the invitation of H.E. President Ibrahim Mohamed Solih. The official welcoming ceremony was held at Republic Square.

Upon arrival at the Izzuddin Jetty in Malé, H.E. President Solih received Samdech Techo Prime Minister Hun Sen. He was then escorted to the saluting dais and offered a seven-gun salute by the Maldives National Defense Force (MNDF). It was followed by the performance of the national anthems of the two countries by the MNDF brass band.

At the President's Office, H.E. President Solih will meet Samdech Techo Prime Minister Hun Sen, followed by official talks to strengthen existing ties and develop partnerships between the two countries. The two leaders will also preside over an agreement exchange ceremony and hold a joint press conference to speak about the outcomes of the talks.

The visit is Samdech Techo Prime Minister Hun Sen's first to the Maldives. The Maldives and Cambodia established diplomatic relations on September 21, 1995. 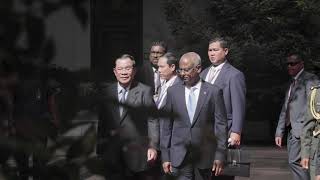