Religious unity is the strongest defence of our independence and sovereignty, says the President President Ibrahim Mohamed Solih stated on Wednesday that our unity, fortified by our Islamic faith, is the strongest defence shielding our independence and sovereignty. He made the statement while speaking at the special ceremony to commemorate the day the Maldives embraced Islam.

Addressing the ceremony, the President called on the nation to uphold our Islamic values and principles. Noting that Islam is the religion of peace, harmony, and brotherhood, the President highlighted the importance of truth in promoting and protecting our Islamic virtues. He also called on the nation to stray from acts that promote strife in the community.

On this note, the President spoke about efforts by some to mislead the public about the ongoing dispute concerning the delimitation of the maritime border between the Maldives and Mauritius. The President said efforts to settle the dispute had been going on for far too long and an agreement on the matter had been reached with the United Kingdom back in 1992.

The President noted that deliberations later progressed on the matter between the Maldives and Mauritius in 2011. He added that previous governments had in the past carried forward negotiations on the matter with different parties.

The President stated that his administration is seeking a resolution to the dispute concerning the delimitation of the maritime border at the International Tribunal of the Law of the Sea (ITLOS), and not with any specific country. He assured that the administration is acting in the best interests of the country.

The President also reaffirmed that his administration is committed to ensuring the independence and sovereignty of the country. He also noted that the Constitution stipulates Maldives’ Exclusive Economic Zone (EEZ) and how to settle disputes over our maritime borders.

The President also expressed his disapproval of deliberate attempts to mislead the public and create strife for political gain.

The ceremony held to commemorate the day the Maldives embraced Islam concluded with a special dua. The occasion is commemorated every year on the 2nd day of Rabi al-Akhir. 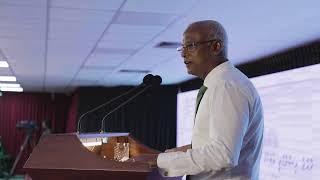 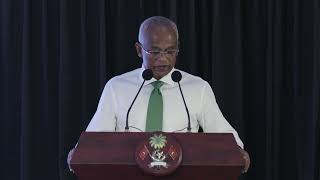