Efforts are underway to develop an effective insurance programme for farmers, says the President President Ibrahim Mohamed Solih on Monday stated that the government is working on developing an effective insurance programme for the Maldivian farmers. He made this remark while speaking at the meeting held with the farming community in Kaashidhoo Island in Kaafu Atoll.

The President stated that the farmers had previously raised concerns about the risk of taking loans and then having to bear extremely heavy costs in the event of natural disasters. He said that the Kashidhoo farmers had stressed the importance of having insurance plans in place to mitigate this risk. The President stated that the administration is currently working to develop an efficient insurance programme for farmers and that it is in discussions with Allied Insurance Company about developing a dedicated insurance programme for farmers, adding that they had even attended this year's agricultural exhibition.

Speaking about Kaashidhoo Island's land use plan, President Solih stated that the government's strategy is to use the island's natural land for agriculture while reclaiming territory on the west side of the island for tourism.

During the meeting, the island’s farming community relayed their concerns to the President. These include the difficulties of transporting fresh produce to Malé City, maintaining a good market price in the capital city's local markets, the scarcity of adequate agricultural land, and the fiscal challenges they face as a result of undocumented expatriates working in the field. The farmers noted that the establishment of the Agro National Corporation (AgroNat) by this administration alleviated many of their concerns, and that they were eager to move forward in accordance with the company's agricultural policies.

The President acknowledged the dedication of the farming community of Kaashidhoo Island's and congratulated them for organising the activities for World Food Day and Farmers' Day this year.

Before the meeting, the President also toured the agricultural exhibition held at the K. Atoll Education Centre in Kaashidhoo Island to mark this year’s Farmers’ Day and World Food Day. He also inquired about the agricultural produce and farming equipment showcased in the stalls of the exhibition. The exhibition, held from October 15–19, 2022, featured 19 participants, including eight from Kaashidhoo Island. 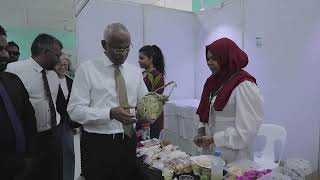 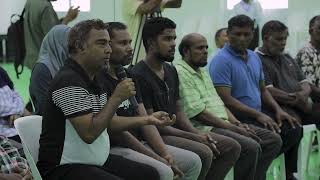