The President meets with members of the Haa Alifu Atoll Council: members commend the numerous developmental initiatives carried out in the atoll President Ibrahim Mohamed Solih on Wednesday morning met with the members of the Haa Alifu Atoll Council. The meeting was held at the Haa Alifu State House in Dhidhoo Island.

At the meeting, the council members stated that a number of developmental projects had already been completed in the atoll while several projects were still underway. They expressed the need to expedite some of these projects.

The atoll council members also conveyed their concerns to the President. Some of these concerns include budgetary constraints; finding an income source for the islands without reefs and lagoons within their jurisdiction; the need to upscale the healthcare facilities in the H.A. Atoll Hospital; and upgrading the harbour in Ihavandhoo Island in Haa Alifu Atoll. They also mentioned that Maldives Immigration branch in Dhidhoo Island is understaffed, which hinders the immigration services in the atoll.

Speaking at the meeting, the President thanked the council members for the warm welcome accorded to him and his delegation from the islands of Haa Alifu and Haa Dhaalu Atolls. He stated that the launch of Zone 1 of the Raajje Transport Link (RTL) high-speed ferry service will aid in the development of the atoll. The President noted that the budgetary constraints and the jurisdictional issues the councils face were discussed during the most recent Viavathi Raajje Conference held on Gan Island in Laamu Atoll. He said that the administration was working on finding solutions to these recurring problems. President Solih also assured that the administration would work towards providing healthcare services without disruptions and that facilities would be updated.

The administration initiated 199 projects in Haa Alifu Atoll, of which 73 have been completed. Several upcoming projects for the Haa Alifu Atoll are in different stages of planning and bidding. 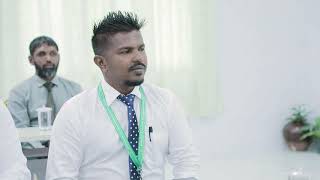