President Ibrahim Mohamed Solih on Tuesday stated that restoring the wealth and autonomy of islands begins with the commencement of the Raajje Transport Link (RTL) ferry service. He made the remark while speaking at the ceremony held to officially launch Zone 1 of RTL in the harbour area of Dhidhdhoo Island in Haa Alifu Atoll.

In his speech, the President spoke about how the Bodu-Thiladhunmathi islands in the Maldives’ northernmost atolls had always been self-sufficient. He said that the people from the north were known to be productive, wealthy, and prosperous in bygone days. The President recalled how the islands in these atolls had trade routes that linked them directly to other countries. He went on to elaborate, stating that policies and subsequent changes that resulted from the transition of the governance system from a monarchy to a republic were detrimental to the progress of the islands.

President Solih stated that the lost wealth and progress of these islands must be restored and that these anticipated changes begin with the commencement of the RTL. He noted that the RTL network would link the islands in Huvadhu Atoll (comprising of Gaafu Dhaalu and Gaafu Alifu atolls), Fuvahmulah City, and Addu City in the Maldives’ south within the following year.

Speaking about other ongoing development projects in the northern atolls, the President emphasised the Hanimaadhoo International Airport expansion project. He revealed that the administration had secured the MVR 2.1 Billion needed for the project and that it had been contracted for development. The project includes the expansion of the airport runway to 2.46 kilometres and developing its terminal to accommodate 1.3 million passengers every year. The President said that the administration aims to create 8,000 tourist beds in the Bodu-Thiladhunmathi atolls.

The President assured all residents and visitors to the atoll that inter-atoll transportation would be simple henceforth. He added that the RTL network would improve healthcare, trade, education, and other services as the transportation link binds all 41 islands of Bodu-Thiladhunmathi in an unbreakable bond.

President Solih was presented with a special commemorative plaque during the ceremony. The plaque was presented to the President by Abdulla Waheed, the Dhidhdhoo constituency member of the Parliament. The President travelled on-board the RTL ferry from Utheemu to Dhidhdhoo in Haa Alifu Atoll this evening to experience the newly commenced ferry service.

RTL has commenced ferry services in Zone 1 as part of the first phase of the "Integrated National Public Ferry Network" project. Zone 1 of RTL connects 41 islands in the Bodu-Thiladhunmathi region, with 13 high-speed ferries operating to all islands daily. 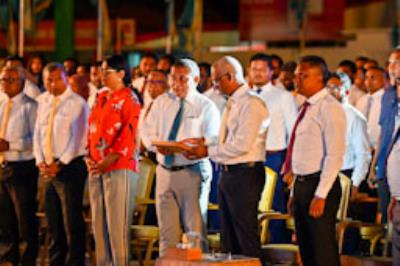 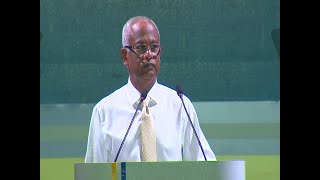 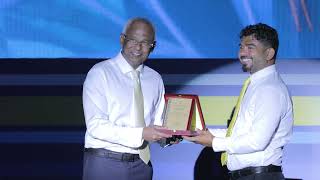