President Ibrahim Mohamed Solih on Sunday stated that decentralised governance is the most significant administrative change the country has ever seen. The President made this remark in his opening address at the third Viavathi Rajje conference being held in Gan Island of Laamu Atoll.

The President said that the development projects spearheaded by the administration are carried out in a manner that would enable every citizen to attain self-determination and build prosperous lives with their families. He also highlighted the Maldives Transport Link (RTL) initiative that had facilitated transportation to an unprecedented level and revived the economic activities of individual islands.

In his speech, the President underscored the administration’s initiatives to strengthen the healthcare system. He said that the expansion of the health sector is currently under way with a specialist doctor outreach programme and the mobile laboratory services targeted towards islands that lack these services.

Speaking about the administration’s minimum wage policy, President Solih particularly noted that the initiative eliminated the biggest obstacle to attracting professional principals and teachers for the education sector. He added that the policy ensured financial stability for many and that this transformative remedy to the education sector had been lagging for too long.

Elaborating on the successes of the education sector, the President stated that the changes pioneered by the administration were evident from the number of students from remote islands that received the High Achievers Awards. He noted that these students were competing with the rest of the world and that the smaller schools in the islands had proven that “Jazeera Maldives” was on the right track.

President Solih also mentioned the Maldives' infrastructure developments in his speech. He noted that until 2018, 70 per cent of the inhabited islands in the country lacked water or sewerage systems and stated that it was the administration’s aim to complete these essential services in all inhabited islands during this five-year term. He also said that power generation had increased significantly, doubling the total capacity recorded over the last 70-years combined. He credited FENAKA Corporation for carrying out mega projects of replacing the old, outdated, and defective generator sets and reviving the people from harmful smoke emitted from the powerhouses.

President Solih emphasised that decentralised development was the cornerstone of all of the administration’s policies and reiterated that his administration sought equitable development, despite the size or political leanings of the island. The end result of prosperous “Jazeera” lives would be the union between every service, business, and every island, the President said.

The President stated in his speech that the decentralization system is now the major pillar of the government's policies, which are all created to make it easier for the growth of islands that are closely connected to one another. 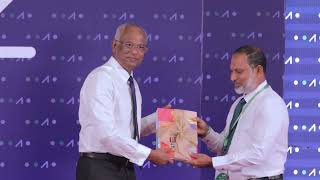 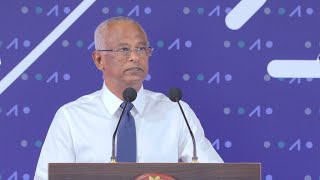