President Ibrahim Mohamed Solih met on Saturday with the island council and the Women’s Development Committee (WDC) members of Dhiggaru Island in the Meemu Atoll. At the meeting held in the school, the President and the island’s representatives had extensive discussions on ways to address the issues and concerns facing the community.

At the meeting, the council members said they deeply valued the President’s approach of allowing them to consult with him about the administration’s developmental plans for the island. They also extended to the President their gratitude for the opportunity to provide input on developmental projects that affect their community.

The administration is currently undertaking numerous developmental projects on the island. The island recently saw the completion of the coastal protection project initiated by this administration and the start of its land reclamation project.

The council members also discussed with the President the most pressing community needs. Some of the issues discussed at the meeting include the need for a housing project; improving banking and healthcare services; addressing space constraints at the school and introducing higher secondary education; resolving issues facing the sewerage network; and increasing water production capacity. They also asked the President to seek ways to expedite the land reclamation project.

The President arrived on Dhiggaru Island in the afternoon, where he attended a ceremony to inaugurate a volleyball court developed on the island. He also joined a friendly volleyball game between two veterans’ teams held as part of the ceremony.

As part of his five-island tour of Meemu Atoll, he visited the islands of Raiymandhoo and Maduvvari earlier in the day. He would then travel to Veyvah and Muli Island on Sunday. 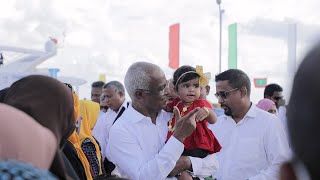 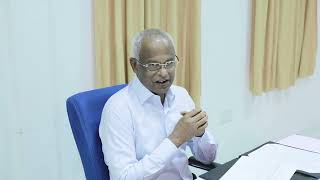 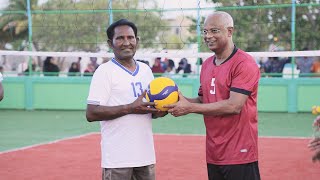