H.E. President Ibrahim Mohamed Solih on Thursday concluded his official visit to India on the invitation of the Prime Minister of India, H.E. Narendra Modi. The President travelled to New Delhi and Mumbai during this visit.

The President first travelled to New Delhi, where he held official discussions with the Indian Prime Minister at Hyderabad House. The two leaders reviewed the status of past and present cooperation and discussed future collaboration and ways to strengthen existing ties.

The President and the Prime Minister also presided over the exchange of six key agreements between the two nations. The agreements ranged from capacity building and training to financing pivotal development projects in the Maldives. President Solih and Prime Minister Modi, most notably, initiated the "Pouring of First Concrete" of the Greater Malé Connectivity Project (GMCP). The project, which involves the construction of a bridge that connects Malé, Villimalé, Thilafushi, and Gulhifalhu, is backed by a USD 400 million line of credit from the Indian Exim Bank and a USD 100 million grant from the Indian government.

The President thanked the government of India for facilitating an additional USD 100 million for the USD 800 million Line of Credit previously provided through the Exim Bank of India. The two leaders welcomed the approval of Exim Bank’s financing to construct 2000 social housing units in addition to the 4000 units previously approved to be developed in the Greater Male’ Region. The President also thanked the Prime Minister for the support to modernise the Maldives National Defence Force (MNDF)’s infrastructure, vessels and equipment.

President Solih paid a courtesy call on the President of India, H.E. Droupadi Murmu. The call took place at Rashtrapati Bhavan in New Delhi, India. President Solih congratulated President Murmu on her inauguration to office and expressed hope that bilateral relations between the Maldives and India would strengthen during her tenure. Earlier in the trip, H.E. Dr Subrahmahniyam Jaishankar, India's Minister of External Affairs, paid a courtesy call on the President.

During the visit, President Solih also attended business forums in the two cities he visited. The President attended the India-Maldives Business Forum in New Delhi, where he invited Indian entrepreneurs to the Maldives to explore business opportunities, and later attended the India-Maldives Business Forum held in Mumbai. He later visited the Bombay Stock Exchange (BSE) and held discussions with the board members and other management staff there. The BSE expressed interest in exploring opportunities to collaborate on the development of the Maldives' stock markets.

Before his return, the President toured the Jawaharlal Nehru Port Trust (JNPT), India's second largest container handling port, where he was given a guided tour and the Chairman of the facility, Mr. Sanjay Sethi briefed the President and his delegation on the history and operations of the JNPT.

President Solih’s visit to India signifies the close bilateral relations between the two countries. India has been a vital partner in the socioeconomic development of the Maldives. The administration is currently developing a number of crucial infrastructure and community empowerment projects with Indian assistance. A high-level delegation of government officials and business leaders from the Maldives accompanied the President on this visit. 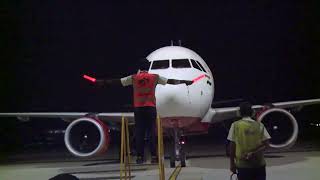