Their Excellencies, Maldives’ President Ibrahim Mohamed Solih and Indian Prime Minister Narendra Modi, held official talks between the governments of the Republic of Maldives and the People’s Republic of India. They were joined at the talks held at the Hyderabad House in New Delhi, India on Tuesday afternoon by senior delegates from both countries.

During the discussions, President Solih and Prime Minister Modi shed light on the two countries' close bilateral relationship, which dates back several generations. The leaders reviewed the progress of the past and present cooperation and discussed future cooperation and ways to strengthen existing ties in a variety of sectors where the Maldives and India have mutual agreements.

President Solih emphasised gratitude to the Indian government for the socioeconomic and infrastructural assistance provided to the Maldives, especially noting the assistance on the Greater Malé Connectivity Project, the proposed Cancer Hospital in Gan, Laamu Atoll and the development of 4000 housing units underway in Hulhumalé, as well as the commitment to finance an additional 2000 housing units in the greater Male’ region.

President Solih indicated that both countries would greatly benefit from tourism cooperation and reaffirmed the Maldives’ commitment to work with India to address the threat of terrorism in all its forms and manifestations. He also expressed gratitude for the continued support India provides towards the development of human resources in the Maldives each year.

President Solih stated that he looks forward to working closely with India to strengthen and diversify trade relations and investment opportunities between the two countries.

President Solih also praised the ongoing efforts to make RuPay Cards available in the Maldives, which would boost bilateral travel, tourism, and economic ties to the mutual benefit of both countries.

Prime Minister Modi also stated that India has always supported various development projects in the Maldives and assured that this will continue. He said that the visa agreement signed during President Solih’s last visit to India helped boost tourism.

Concluding the official talks, the President and the Prime Minister reaffirmed their commitment to bolstering the fraternal bonds of friendship between the two countries.

Prior to the official talks, President Solih and Prime Minister Modi held a one-on-one meeting followed by restricted talks between the two governments. 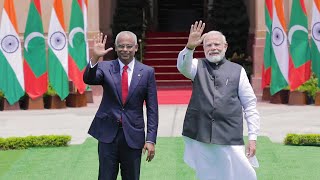