The President and the Gaafaru fisher community discuss progress of fishing President Ibrahim Mohamed Solih on Friday night met with the fishermen in Gaafaru Island of Kaafu Atoll and listened to their concerns about the future of the Maldives’ fishing industry. At the meeting held at the Gaafaru harbour area during the President’s ongoing visit to the island to participate in the official celebrations of the 41st National Fishermen’s Day, discussions centred around the progress of the fishing sector.

At the meeting, the fishermen stressed the importance of having fisheries sector representatives at the Fisheries Promotion Board. They also shared with the President other concerns, including financial challenges, banking difficulties, financing for imports, and long waiting times at fish purchasing centres. On this note, they requested the President to look into ways to alleviate these difficulties, especially during the peak fishing seasons.

Speaking with the fishermen, President Solih said that the administration welcomes the opinions and recommendations of all stakeholders in formulating policies in the respective areas. Speaking further, the President and accompanying ministers reassured the fishing community that the issues they raised would be addressed and resolved.

The President was accompanied by Vice President Faisal Naseem, members of the Cabinet and senior government officials. 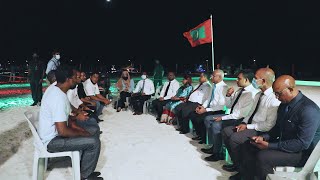