We must strive to maximise the potential of the Expo 2020 in Dubai, by letting deeds speak louder than words at the worldwide gathering to solve current global challenges – President H.E President Ibrahim Mohamed Solih stated that we must strive to maximise the potential of the ongoing Expo 2020 in Dubai by letting our actions speak louder than words at the worldwide gathering to solve current global challenges ranging from food insecurity to financial crashes. He underlined the need to ramp up combined efforts to pool resources to lift each other as the world works towards a greener, more resilient and more sustainable future in the wake of the Covid-19 pandemic. He made these remarks while speaking at the official ceremony held at Expo 2020 to mark the National Day of the Maldives.

During his remarks, the President expressed his appreciation to the leadership of the United Arab Emirates (UAE) for hosting a superbly planned Expo - a feat made all the more impressive given that an expo of such sophistication and magnitude is being held as the world recovers from the devastation wreaked by the worst pandemic in living history. He stated that despite the many hurdles, UAE's leadership’s ability to gather over 192 countries for the Expo was very impressive and a testament to their foresight and leadership.

President Solih emphasised the bilateral relationship between Maldives and UAE, stating that UAE had always been a significant development partner and a close friend of the Maldives. He also stated that both nations have often come together on common positions in the international arena and expressed his hope that both countries would continue to foster those ties. Speaking in this regard, he also stated that the Maldives looks forward to further deepening the partnership with UAE and other nations in the Gulf Cooperation Council (GCC) and Middle East Strategic Alliance (MESA) region.

During his speech, the President also explained the 'Dhoni' concept which the Maldives opted to use to commemorate the Maldives' 'Honour Day' at the expo, since 99 per cent of the island nation comprises the ocean, and the Dhoni had become an integral part of our identity and way of life. During his remarks, the President stated that the Maldives utilised the Maldives Pavilion and the opportunities offered by the Expo to exhibit the Maldives, its natural beauty, heritage and culture, while also underscoring the challenges faced by the Maldives as a small island state. Furthermore, he highlighted the critical role that expos such as this one play in attracting key stakeholders including policymakers and industry professionals, as well as academics and civil society activists. He noted that lasting development relationships are built via people-to-people contact and that the objective for participation in the Dubai Expo was to explore new solutions to overlapping global challenges, as had been done many times before.

Ending his remarks the President also stated that he is confident that the Expo will provide an impressive platform for all countries to learn from each other and to work collaboratively, towards creating a promising future. 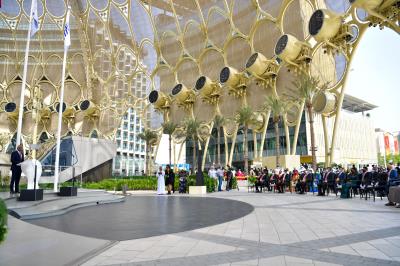 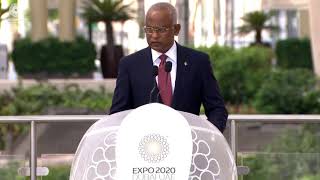