Vice President Faisal Naseem has on Wednesday met with the members of North Miladhunmadulu Atoll Noomaraa Island Council. The meeting was held at the President’s Office this afternoon.

Councillors discussed pertinent issues related to the development of Noomaraa Island. Some issues raised during the meeting include the upgrade needed for the harbour, land erosion, the need for a new office for the council secretariat, development of a futsal stadium, difficulties faced by islanders due to lack of laboratory services at the Health Centre and efforts to improve the local school.

Speaking at the meeting, the Vice President assured the councillors that the government would work alongside relevant authorities to resolve the issues raised. He also reiterated that the Decentralisation Act had granted enhanced authority and financial autonomy to the councils to structure developmental activities within their respective constituencies, and that the council must strive to make the best use of these powers.

The Vice President also enquired about the wellbeing of the residents of Noomaraa Island and urged the council to conduct awareness programmes to dissuade youth from harmful habits emerging in society. 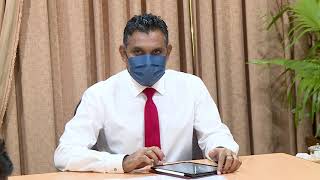