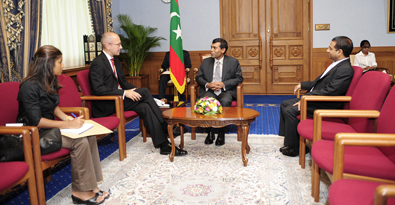 President Mohamed Nasheed has today met with Mr Mark Gooding, the British Deputy High Commissioner to the Maldives, to discuss areas of cooperation between the two countries in development domains.

At the meeting held this morning at the President’s Office, discussions were focused on ways of enhancing the close bilateral ties that exist between the Maldives and the UK.

Mr Gooding assured that the UK would continue support and assistance towards the government’s efforts to enhance democracy and good governance in the Maldives.

After the meeting, President Nasheed also launched the British High Commission’s Virtual Embassy website in the Maldives, Speaking at the launching ceremony, the President said that the new website would assist Maldivians travelling to the UK and also to maintain the very close relations between the Maldives through the website.