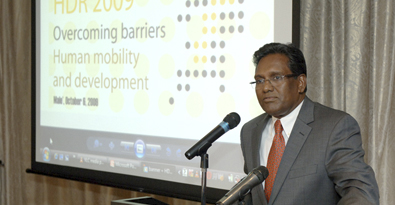 This year’s HDR explores the topic of migration and its effects on development. It argues that mobility has the potential to enhance human development among movers, stayers and the majority of those in destination places. However, it reveals, that processes and outcomes can be adverse, and that there is scope for significant improvements in policies and institutions.

Speaking at the function held at Holiday Inn, Dr Waheed said people migrate for mainly two reasons. One reason, he said was because people want more opportunities. However, he said, others “move because they are forced to – because they are seeking freedom”.

Speaking further, he said, many Maldivians, in the past had been forced to move abroad for political reasons and because people didn’t have freedom in this county to express their views and to exercise their human rights.

“The change that has taken place in the Maldives in the past 10 months is the availability of the opportunity for the people in Maldives to remain in the country and not to be forced to migrate because of their beliefs”, said Dr Waheed.

In his speech, Dr Waheed noted that in the Maldives there is a lot of internal migration and that 1/3rd of the population lives in malé or around malé. He also said that the heavy congestion in male has also created a lot of socio-economic issues.

He said the drugs issue and juvenile delinquencies were major issues that urgently need to be addressed and that the government would require the assistance and cooperation of the civil society and individuals in this regard.

He added that increasing employment opportunities, providing better healthcare and better education were also necessary conditions to promote human development in the islands.

In his speech, Dr Waheed reiterated the government’s commitment to achieve the Millennium Development Goals and promote human rights.
SHARE:
Copied!
LATEST FROM THE PRESS OFFICE