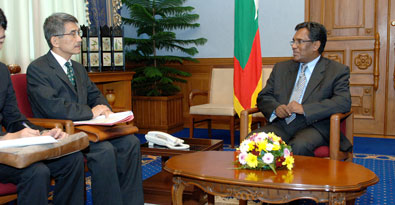 During the meeting held at the President’s Office this afternoon, Dr Waheed congratulated the Ambassador on the official opening of Hiriya School which was built with Japanese assistance. Vice President also said Japan had always provided their support and assistance towards the development of the Maldives, and extended appreciation to the Japanese government for their assistance.

At the meeting, Dr Waheed also briefed the Ambassador on the economic situation and the government’s plan to become carbon neutral. Discussions were also focused on other matters of mutual concern such as drugs issue and religious fundamentalism.

Ambassador Takahashi said close bilateral relations existed between the Maldives and Japan, and that he wished to enhance those relations. He also expressed his assurances that Japan would continue to support the Maldives in its development
SHARE:
Copied!
LATEST FROM THE PRESS OFFICE