Lale International School is one of the very first of the new model of schools that we want to have in this country: President Nasheed. President Nasheed congratulates those who won People’s Majlis seats 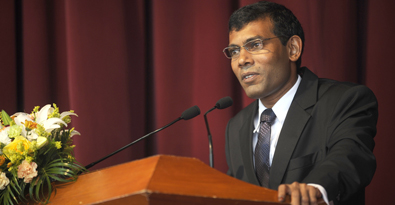 President Nasheed has said that Lale International Youth School is one of the very first of the new model of schools that the government wanted to have in the country. The President made this statement while speaking at the function held this morning to officially inaugurate Lale Youth International School in Hulhumale’.

Speaking at the function, the President also congratulated all those who had been elected to the People’s Majlis.

“We are very pleased with the results not because any party won or lost. That is just part of the picture. More importantly, we have been able to go through these elections, without intimidating the people, without arresting anyone and also without any undue influence from the government on the elections,” said the President.