The struggle for democracy in the Maldives has parallels with the global struggle against climate change, says President Nasheed 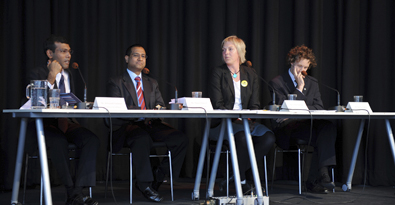 President Mohamed Nasheed has said that the struggle for democracy in the Maldives has parallels with the global struggle against climate change. The President made this statement in his lecture on the theme: “Saving Paradise”, during his ongoing visit to Sweden. He also said that in both cases fatalism could be fatal.

The lecture and the discussion which followed was co-sponsored by Anna Lindh Memorial Fund and Tällberg Foundation.

In his lecture, the President said that in the Maldives, fear and oppression could not crush the democratic promise of freedom and ‘Other Maldives’. He added that in spite of the odds, the people of the Maldives never gave up their struggle for democratic change. Likewise, he said, we must not give up the fight against climate change.

Highlighting the government’s efforts to combat climate change, the President said the Maldives was not prepared to passively accept humanity’s destruction. He further stated that this was why the Maldives announced plans to become world’s first carbon neutral country.

Furthermore, the President stressed the importance of using tomorrow’s technologies as we upgrade our infrastructure.

Speaking on the high priority attached by the government to consolidate democracy, the President noted that democracy was still very tender in the Maldives and that its success depended on the government’s ability to fulfil its electoral pledges.

He also underscored the need to consolidate and strengthen democracy in the Maldives. Speaking in this regard, the President said that an in depended legislature, a stronger judiciary, free press, active civil society and strong independent institutions are all essential to consolidate democracy.