During the meeting, the Vice President and the Prime Minister expressed interest in working closely to discuss matters of mutual interest, particularly to enhance and strengthen the existing cooperation at the bilateral and multilateral level. They also spoke about cooperation in the fields of agriculture, higher education, trade, and tourism.

The Cambodian Prime Minister expressed his delight at discovering the tourism sector of the Maldives at such an advanced level and stated that he is convinced that the tourism cooperation between both countries would be fruitful. They further discussed issues of mutual interest such as renewable energy, climate change, and economic diversification.

The Vice President expressed his belief that the exchange of visits at the highest level was important to move bilateral relations to new heights. He also expressed confidence that the official talks concluded between the two nations were productive and paved the way for greater cooperation and collaboration between the Maldives and Cambodia.

Concluding the meeting, the Vice President and the Cambodian Prime Minister expressed hope to continue frequent exchanges to further enhance the Maldives-Cambodia relationship and explore new avenues to strengthen the existing cooperation. 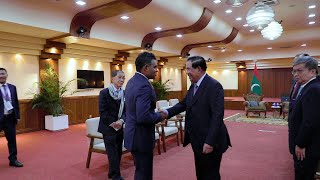