The Minister of Foreign Affairs and Trade of Hungary, H.E. Péter Szijjártó, paid a courtesy call on Wednesday on H.E. President Ibrahim Mohamed Solih. The meeting was held at the President's Office.

The President and Mr Szijjártó spoke about enhancing bilateral relations between the two countries and emphasised their commitment to strengthen cooperation in areas of mutual interest and benefit. Mr Szijjártó outlined the existing ties between the two countries and emphasised on the MoUs signed today. He highlighted that Hungary had increased the number of scholarship opportunities offered to Maldivian students from 15 to 25.

Highlighting the administration's commitment to delivering higher education opportunities to Maldivian students, the President extended his appreciation for the decision to increase Hungarian scholarships to the Maldives. The President also thanked the government of Hungary for easing visa facilitation for Maldivians.

The President also extended his gratitude to the government of Hungary for its support in evacuating Maldivian students in Ukraine. The President and Mr Szijjártó also discussed enhancing cooperation in various fields of mutual interest, including investment opportunities in the Maldives.

In conclusion, the President and Mr Szijjártó reaffirmed their commitment to strengthen cooperation between the two countries in the coming years. 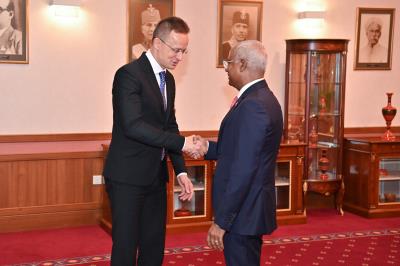 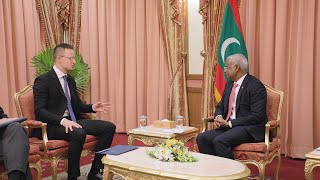