President Ibrahim Mohamed Solih announced Monday the administration's plans to reestablish primary healthcare services next year. He made the announcement while speaking at the ceremony held to mark the inauguration of initiatives to control Noncommunicable Diseases (NCDs).

At the ceremony, the President revealed the findings of the "STEPS Noncommunicable Disease Risk Factors Survey 2020-2021," carried out by the Maldives National University (MNU) in collaboration with the Health Protection Agency (HPA) and the World Health Organization (WHO).

Citing the findings, the President expressed alarm over the prevalence of NCDs caused by unhealthy habits and lifestyles, which he said require urgent public health action and cannot be left unchecked. Stressing the high mortality rate of 84 per cent due to NCDs, the President underscored malignant neoplasms, cerebrovascular diseases, pulmonary diseases, and nephrology as several leading causes.

While detection, screening, and treatment of NCDs, as well as palliative care, are critical components of the response to NCDs, the President also highlighted the importance of ensuring healthy lifestyles and wellness to prevent NCDs. He recalled the importance of the administration's "Dhulhaheyo Hashiheyo Eid," launched earlier to promote health, well-being, and active lifestyles.

On the plans to reestablish primary healthcare services, the President stated that one of the main aims was to increase public awareness about NCDs, promote early testing, and ensure access to medicine and proper treatment. He also noted that the "National Cessation Toolkit" had been introduced to assist smokers in quitting and is available across all healthcare centres.

The President said that the Ministry of Youth, Sports and Community Empowerment is currently implementing several projects in the islands to provide equipment and facilities for outdoor gyms, football and futsal grounds, and volleyball courts, as well as cater for other sporting needs. He added that the vaccines required to prevent girls from developing cervical cancer had been added to the national vaccine schedule.

The President also noted that implementing the "National Multi-Sectoral Action Plan," unveiled tonight, would meaningfully resolve numerous issues. He then called for the participation of all stakeholders in implementing the action plan. 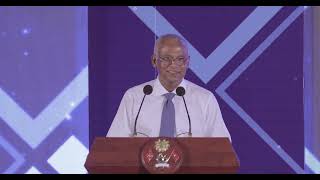 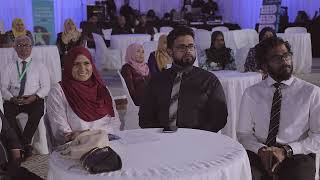