The President attends the closing of the Nestlé Kids’ Football Fiesta President Ibrahim Mohamed Solih on Saturday attended the closing ceremony of the Nestlé Kids’ Football Fiesta. The tournament was held at the Henveiru Football Stadium.

The tournament was organised by the Soccer Veterans Association of Maldives and saw the participation of 720 students from 20 schools in the Malé region. The tournament targeted students in grades 3-4.

The President presented the championship trophy and medals at the ceremony to the winning teams. He was also presented with a commemorative plaque of appreciation by the organiser. 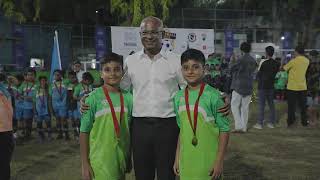