The President meets with the MNACI members President Ibrahim Mohamed Solih on Thursday met with the members of the Maldives National Association of Construction Industries (MNACI). The meeting was held at the President’s Office this afternoon.

At the meeting, members of MNACI shared their concerns about the Maldives’ construction industry with the President as well as the impacts of the global economic downturn. In this regard, members of the association highlighted problems such as high inflation following the Covid-19 pandemic and the Russia-Ukraine war; escalating prices of essential building materials in the global market; ensuring that construction companies receive their dues after the projects are completed; and other financial difficulties faced by the companies. They also noted the challenges in the real estate industry and the problems that arise in finding laborers.

Responding to MNACI members, President Solih stated that he would discuss the issues raised with the relevant ministries and that the administration is already working to release funds to contractors as soon as possible.

Before concluding the meeting, the President of MNACI extended an invitation to the President to attend the 45th Convention of the International Federation of Asian and Western Pacific Contractors Associations (IFAWPCA) to be held at Paradise Island Resort from 15–19 November, 2022. They also presented the President with the Dhivehi edition of the report prepared by MNACI on the impact of Covid-19 on the construction sector. The report, on the safety standards of the country's construction sector has been prepared in seven different languages.

MNACI is an organisation formed by companies involved in the construction sector in the Maldives. 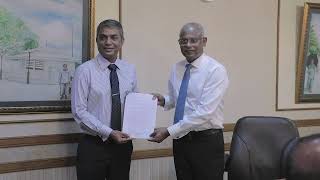