The President and the First Lady also inaugurated the awareness campaign and participated in the ‘Let’s Get Active’ movement.

The gala dinner night is an annual event organised by the Cancer Society of Maldives to raise funds for cancer screenings and to raise awareness about early detection, diagnosis, and screening in order to promote healthier lifestyles.

The aim of the Cancer Society is to contribute towards the well-being of the community by creating awareness about cancer, providing support and circulating information and resources to elevate the experience of people fighting cancer. They also give priority to conducting cancer research and creating a cancer patient registry database in the Maldives. 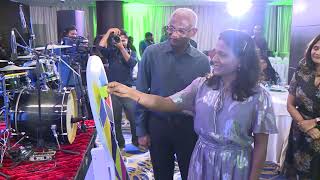