The Vice President praised and applauded the students, and their parents for their tireless efforts, especially noting Nabeeh’s success in the competition. He also stated that Maldivian students participating in a prestigious Holy Quran competition is an honour and brings goodwill to the nation.

Vice President Faisal Naseem went on to say that the administration works hard to instil fondness and respect for the Holy Quran in children's hearts, and that it is working to find more opportunities for students in the field of Quran. The parents who attended the meeting thanked the administration for the assistance and support given to their children. 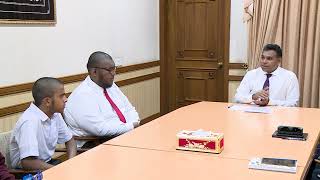