President meets with the council and WDC of H.Dh. Naivaadhoo: Community pleased with the numerous developmental initiatives President Ibrahim Mohamed Solih on Monday met with the members of the island council and the Women's Development Committee (WDC) of Naivaadhoo Island in Haa Dhaalu Atoll. The meeting was held this afternoon at the Naivaadhaoo Pre-School’s hall.

At the meeting, the council and WDC members thanked the President for the developmental initiatives on the island. They also highlighted that President Solih was the first President to visit the island in 13 years. The members also emphasised the importance of expediting some of the ongoing projects.

Regarding concerns about the Council Secretariat office, the President said that the Local Government Authority (LGA) oversees the construction of the council offices. He assured the members of the council and WDC that discussions would be held with LGA to include H.Dh. Naivaadhoo on its priority list. President Solih further said that discussions would be held with relevant authorities to address the issues and concerns raised by the members at the meeting.

This administration has carried out four developmental projects on the island thus far. There are three projects that are currently ongoing, including the development of the sewerage system.

Naivaadhoo was the first stop on the President’s three-day official visits to Haa Dhaalu and Haa Alifu atolls. He will be visiting Finey Island in Haa Dhaalu Atoll next. The President is accompanied by cabinet ministers and senior government officials. 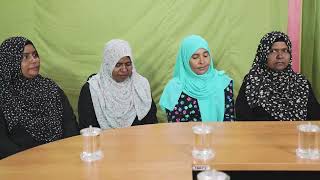