Vice President Faisal Naseem stated on Wednesday that capacity building in the healthcare sector is a core component of the administration's nation-building efforts and reiterated its continued commitment to support the development of private healthcare institutions. He made these remarks while speaking at the fourth Maldives Brain and Spine Conference 2022, organised by ADK Hospital. The opening ceremony of the conference was held at CROSSROADS Maldives.

The Vice President highlighted the private sector's contributions to human resources development and applauded ADK Hospital for its role in capacity-building. He noted that the hospital provided numerous training and specialisation opportunities for doctors and other staff.

The administration has provided higher education scholarship opportunities in medicine and related fields to over 70 students. The number of students enrolled in the administration's "Free Education Scheme for Degree Students" surpassed 15,000, of which over 800 are in nursing programmes.

The Vice President highlighted the new services ADK Hospital plans to introduce soon. He expressed his gratitude and that of President Ibrahim Mohamed Solih to the management and staff of ADK Hospital for these contributions.

"Efforts to develop and enhance healthcare services are progressing on every island and every atoll. For instance, establishing a catheterisation laboratory in the Addu Equatorial Hospital is underway. We expect this Cath Lab to be open very soon," he said.

In conclusion, the Vice President stressed the alarming number of non-communicable diseases and called for the community's support in promoting healthy lifestyles. He said that reducing instances of NCDs and improving public health is a relatively simple task when the community comes to work together. 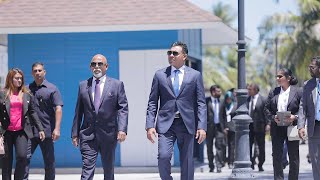 India has been one of the Maldives' most trusted and valued partners, says the President The non-resident Ambassador of Poland pays a farewell call on the President The President declares February 6, 2023, as a government holiday The Vice President officially inaugurates the GP Clinic in Hulhumalé Applications open for membership in Maldives Broadcasting Commission