The army must always have "command and control" over safeguarding the nation, says the President President Ibrahim Mohamed Solih on Tuesday stated that the army must always have "command and control" over safeguarding the nation from threats posed to its independence and sovereignty, from within and outside. He made the remark while speaking at the official function held to mark the 130th anniversary of the Maldives National Defence Force (MNDF).

Speaking at the ceremony, President Solih stated that a nation's greatest asset is its independence, and that the brave soldiers of MNDF are the first line of defence protecting the Maldives' independence and sovereignty.

The President spoke about the global threat of terrorism, stating that the Maldives is also at risk. He said that terrorists are keeping up with technological advancements and becoming more innovative, therefore, the Maldivian people must also be extra vigilant. The President reiterated that soldiers are at the forefront of protecting citizens from such threats, and that the administration places a high precedence on increasing defence capabilities. He added that soldiers now have the opportunity to advance their careers based on their abilities without discrimination or gender bias.

In his address, President Solih stated that military personnel undertake civil responsibilities and have a duty to serve the people. In this regard, he highlighted military assistance provided to the general public during the Covid-19 pandemic. He expressed tremendous gratitude for their services and announced his decision to award the servicemen a "Humanitarian Service Medal".

President Solih also shed light on the administration's efforts over the last two years to increase military operational capacity. He said that MNDF had acquired modern equipment that soldiers needed to defend and protect themselves, and also improved its ability to identify and counter terrorist activities. He added that the military personnel had access to specialised education and skill development programmes.

The President praised the gender equality seen in the ranks of the armed forces, stating that the MNDF is regarded as an exemplary institution in which female soldiers are prepared and ready to hold fort alongside their male counterparts. He then noted that last year, for the first time in the country, female soldiers were promoted to Lieutenant Colonel rank, and that two of the officers were now an essential part of the MNDF's advisory council.

President Solih also highlighted the importance of maintaining regional peace and stability to ensure the country's security and emphasised the role played by the Maldivian military in this regard. 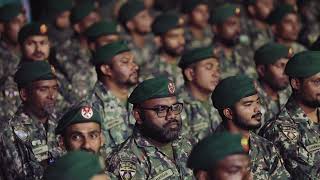 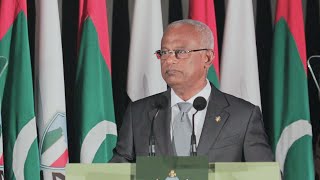