President Ibrahim Mohamed Solih said on Sunday that the new powerhouse built on Veyvah Island in the Meemu Atoll puts an end to the longstanding electricity problems on the island. The President made these remarks after inaugurating the new powerhouse and office building developed on the island by the state-owned utility provider, FENAKA Corporation Limited.

The President recognised FENAKA Corporation and the Maldives Transport and Contracting Company (MTCC)’s role in developing the nation and realising the administration’s "Jazeera Raajje" vision. He assured the community that these state-owned companies would continue to provide essential services to the people and thanked them for their commitment.

President Solih noted public confidence in these companies and stated that most island councils contracted their developmental work to FENAKA and MTCC. The President also announced that FENAKA would be awarded projects to develop ice plants throughout the Maldives in September.

In his speech, the President reiterated that this administration prioritised empowering youth and said the Ministry of Youth, Sports and Community Empowerment would work closely with the island’s community to build sports facilities. Before concluding, President Solih reiterated that the administration provides equal opportunities for all islands, despite their size or population.

The old powerhouse on Veyvah Island was over 29 years old and located near the island’s residential area, which led to noise pollution complaints. The power generation capacity of the old powerhouse was 368 kilowatts.

The new 208 square metre powerhouse built by FENAKA Corporation can accommodate four staff, while the new office building has a capacity of 25 staff. The new powerhouse, with a capacity of 448 kilowatts, was designed to accommodate three generator sets of 400 kilowatts. 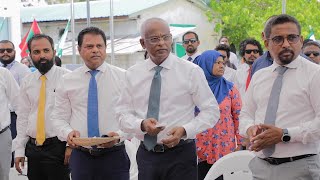 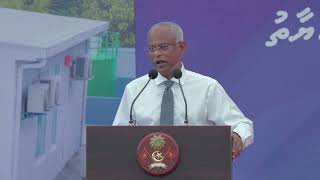