President Solih and his delegation were briefed on the history and operations of the port facilities by the Chairman of JNPT, Mr. Sanjay Sethi. The President was then given a guided tour of the port operations.

The President noted that the aim of the visit was to gain insight into how cargo handling operations were managed at one of the most efficient ports in the world, as the Maldives is in the process of relocating the main port in Malé. Currently, the biggest challenge facing the Malé Port is congestion

The Jawaharlal Nehru Port Trust, in Navi Mumbai, is the premier container handling port in India, accounting for around 50% of the total containerized cargo volume across the major ports of India. In its three decades of operations, JNPT has transformed from a bulk-cargo terminal to become the premier container port in the country. JNPT is connected to over 200 ports in the world and is ranked among the top 100 container ports globally.

President Solih is currently on a four-day official visit to India at the invitation of Prime Minister H.E. Narendra Modi. A high-level delegation of government officials and business leaders from the Maldives are accompanying the President on this visit. 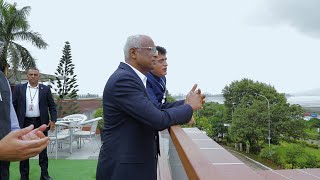