In their statement, President Solih and Prime Minister Modi shed light on the two countries' centuries-long relationship. They spoke about the Maldives-India friendship that has been nurtured and strengthened over the years through consistent communication and high-level exchanges between the two countries. The two leaders also provided details of ongoing developmental projects and expressed interest in further expanding the partnership to include a broader range of sectors.

President Solih cited the ground-breaking "Pouring of the First Concrete" ceremony of the Greater Male’ Connectivity Project (GMCP) and the construction of the 4000 social housing units that began today as an indication of the strong partnership. He also said that the approval of USD 119 million in Buyer's Credit funding from the Exim Bank of India for the construction of another 2000 social housing units in the Greater Male' region made the occasion even more auspicious. The President thanked the Indian government for facilitating additional aid that would ensure the timely completion of important projects such as the Cancer Hospital in Gan, Laamu Atoll and the expansion of Hanimaadhoo Airport.

President Solih expressed gratitude to the Government of India for its continuous support in developing infrastructure and expanding human resource development in the Maldives. He also recognised the assistance provided by the Indian government in managing the Covid-19 pandemic in the Maldives and thanked Prime Minister Modi for his support.

Reflecting on the lesson learned during the global pandemic, President Solih and Prime Minister Modi acknowledged that achieving economic resilience was critical in order to withstand the shock of unpredictable events. In this regard, President Solih advised investors from India to seize the opportunity to form meaningful and mutually beneficial partnerships with the Maldives.

During the press statement, President Solih also commended Prime Minister Modi for his initiative and leadership at the Coalition for Disaster Resilient Infrastructure (CDRI), the International Solar Alliance, and welcomed India’s pledge to achieve net-zero carbon emissions by 2070. The Prime Minister in turn highlighted the Maldives’ pledge to achieve Net Zero by 2030.

Furthermore, President Solih emphasised the two countries' defence cooperation and reaffirmed their unwavering commitment to fighting terrorism in all of its forms and manifestations, as well as to strengthening collaboration to improve marine safety and security in the Indian Ocean region.

Before concluding, President Solih stated that the Maldives would always remain a true friend of India, and reaffirmed his commitment to both countries’ and the region’s shared vision of peace and development.

The President is currently on a four-day official visit to India upon invitation from Prime Minister Narendra Modi. A high-level delegation consisting of government officials and Maldivian business leaders are accompanying the President on this trip. 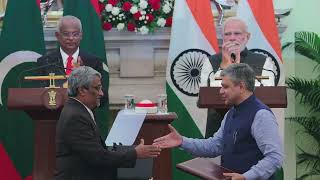 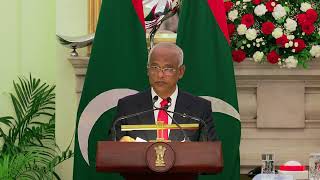