The government’s aim is to provide students with more education opportunities to maximise their potential, says the President President Ibrahim Mohamed Solih has stated that the government’s aim is to provide as many opportunities for students to obtain an education and maximise their potential. He made this statement at the awarding ceremony of the President’s Award & High Achievers Scholarship for GCE A-level high achievers in the year 2021, held at Ghiyasuddin International School on Tuesday night.

The President acknowledged the accomplishments of previous recipients of the President’s scholarships and noted that many of the former students had chosen a career in medicine. He expressed support for their wisdom in choosing a path that would benefit the nation in the long run.

President Solih also discussed education and skill development prospects and emphasised the increase in training programs provided by the government. He said that efforts to establish TVET Centres and Junior Colleges were currently underway on two islands, and that similar facilities would be established on additional islands soon.

Highlighting the initiative to provide affordable education, the President said that 14,711 students had enrolled in the government's free degree programme so far, and that 4696 students had graduated from the programme. President Solih underscored the importance of ensuring equitable access to education, and noted the technological advancements and innovative solutions initiated by the government such as satellite schooling to cater to students in all islands, regardless of size or population. He also noted the initiation of secondary education on seven islands, as well as the introduction of higher secondary education on three more islands.

Speaking to the students in attendance, President Solih said that they were about to enter a dynamic world with different cultures and societal norms. He advised the students to be wary of negative and undue influences that could sway them away from their true objectives. The President urged students to remain true to their own identities, heritage, culture and most importantly, their Islamic faith that would guide them to the righteous path.

The President awarded scholarship letters to six students that achieved the highest results in the GCE A-level examinations. Five of the students were from the Centre for Higher Secondary Education (CHSE) and one was from Kulhudhuffushi Jalaluddin School. All six of the top achievers were female students. The President congratulated the recipients of the awards and wished them success in their future. 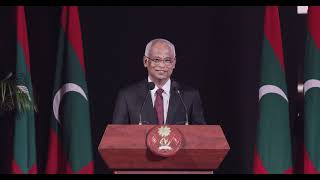 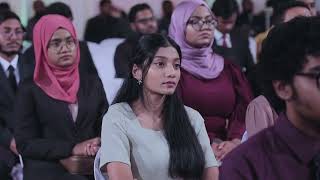