The President highlighted the roles and responsibilities of customs officers, noting that they frequently face risky situations such as attempts to import illegal weapons or various types of illicit drugs. He said that it was their duty to prevent the importation of such prohibited items into the country as they are the watchdogs of the Maldivian borders.

President Solih also emphasised the importance of providing fundamental necessities to customs officers in order to prepare them to handle dangerous situations. In this regard, he assured to set up a mechanism where customs officers could get housing from flats developed by the government and to enable the Maldives Customs Service's 2020–2024 strategic action plan's provision to provide health insurance for custom officers.

The President underscored the government’s efforts to improve Maldives Customs' services, saying that the goal is to make the body more effective and find a solution to the community’s societal problems of drug abuse, terrorism and money laundering.

The President praised the Maldives customs officers for their efforts in combating drug trafficking and stated that positive outcomes had been obtained thus far. He noted that, as of today, more than 182 kg of drugs had been prevented from entering the country since November 2018—an increase of 32% over the preceding five years.

During this evening’s ceremony, President Solih handed over the "President's Colour," a special honour, to six customs officers, while the Maldives Custom Service bestowed the President with a commemorative plaque.

The Maldives Customs Service was established on July 18, 1890. It is a government body that operates in accordance with specified laws. 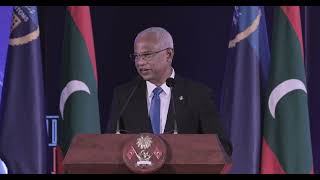 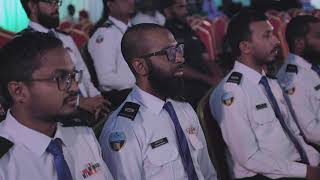