Speaking with Mohamed Ismail Fulhu, President Solih noted that the book was based on valuable information about the culture and traditions followed in island communities, with a particular emphasis on the island of Naifaru in the Lhaviyani Atoll. He also encouraged the writer.

The book delves deep into the culture and traditions followed by the people of Naifaru Island and other islands, and how these traditions came about and evolved. 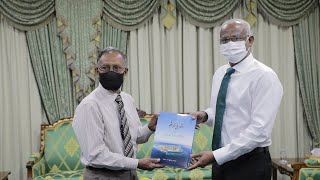