Abdul Azeez Ibrahim on Thursday presented President Ibrahim Mohamed Solih with copies of two books he wrote about the history, lifestyle, and traditions of the people of Dhihdhoo Island in the North Ari Atoll. He presented the books to the President at a meeting held at the President’s Office.

The book, titled "Kureege aadha kaadhathah 1," is based on the lives and lifestyles of the first settlers of Dhihdhoo Island. According to the author, people first settled on the island a century ago. The second book, "Hoadhi hoadhunthakaa libihuri mauloomaathaai amalee thajuribaa," comprises facts about the island and answers many questions about its people.

The President was accompanied by the Chief of Staff at the President’s Office, Uz Ali Zahir, at the meeting. 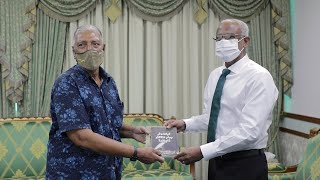