The President meets the Prime Minister of Mauritius President Ibrahim Mohamed Solih on Friday met with the Prime Minister of the Republic of Mauritius, H.E. Pravind Kumar Jugnauth. The meeting took place at the Kigali Marriott Hotel in Rwanda, on the sidelines of the ongoing Commonwealth Heads of Government Meeting (CHOGM) 2022.

At the meeting, the President and the Prime Minister discussed ways to enhance trade cooperation and noted the similarities between the Maldives and Mauritius in the tourism sector. They also discussed bilateral relations between the two countries and areas of mutual interest in international cooperation.

President Solih noted that both Mauritius and the Maldives are part of major platforms such as the United Nations, the Commonwealth of Nations and the Alliance for the Small Island States (AOSIS), adding that the two countries depended on the Indian Ocean for commerce, trade and livelihoods.

The President also stated that the two countries could learn from each other in the tourism sector, particularly revitalising the tourism industry’s role in reversing the economic downfall caused by the Covid-19 pandemic. He also expressed his hopes of strengthening future commercial and economic ties between the two countries.

The President is on an official visit to Rwanda to attend the 26th CHOGM. It is the first CHOGM to be held after a two-year delay due to the pandemic and the first held since the Maldives’ re-accession to the Commonwealth network on February 1, 2020. First Lady Fazna Ahmed and a high-level delegation accompany the President on this trip. 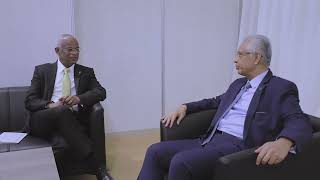