Human resources developed over 50-year-long history are most significant achievement of Funadhoo School, says the President President Ibrahim Mohamed Solih on Friday said that the most significant contribution to the community, and most prominent achievement of Funadhoo School, is the human resources it helped develop over its 50-year-long history. The President made these remarks while speaking at Funadhoo School's golden jubilee anniversary event. He is on Funadhoo Island in the Shaviyani Atoll as part of a two-day visit. He would also visit Holhudhoo Island in the Noonu Atoll.

Reiterating the administration's commitment to ensuring inclusive education and the right for every child to quality education and learning, the President said it aims to build generations of skilled, talented, and innovative youth who strive toward maintaining cohesion and harmony in society. He added that the administration's free first-degree programme sought to realise these goals. In addition to heeding school education, the President urged all students to be mindful of what is happening around them and consider ways to contribute to community development.

The President also spoke about the administration's efforts to further the education sector and noted that 203 education infrastructure projects are currently progressing in different stages of development. A project to develop 15 classrooms in Funadhoo School is underway. The President added that funds would be earmarked in the budget next year to establish an additional administrative building. He also spoke about the implementation of the administration's decision last May to revise the pay structure of education sector staff to ensure a commensurate wage for them.

Speaking about other projects planned for the island, the President announced his decision to commence a land reclamation project next year, as requested by the residents. He added that the administration plans to begin coastal protection work on the island soon. 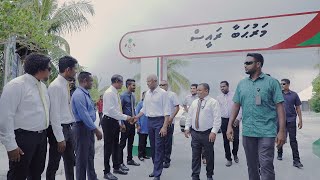 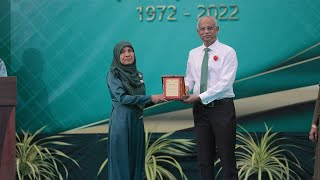 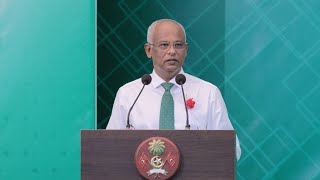