President Ibrahim Mohamed Solih on Wednesday said the administration is making significant progress in its efforts to ensure sports equality. He was speaking during a meeting with the Maldivian chess team at the President’s Office. The team would participate in the Western Asian Junior Chess Championship 2022, held in Ukulhas Island in the North Ari Atoll from June 15-23, 2022.

Speaking with the team members, the President highlighted that hosting international sports tournaments in the Maldives strengthens the administration’s efforts to ensure fairness in sports and equality of access. He said hosting high-profile sports events in the Maldives provides much-needed exposure and experience for local athletes and players.

The Western Asian Junior Chess Championship would feature 160 participants between the ages of eight and 18, representing nine countries. 30 members of the Maldivian team would be joined on Ukulhas Island by an additional 30 local participants. At the meeting, President Solih was also presented with a commemorative jersey of the national team. 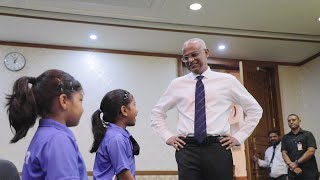