Vice President Faisal Naseem on Wednesday met with the council members of Neykurendhoo Island in the South Thiladhunmathi Atoll and held extensive discussions on the administration's developmental plans for the island. The meeting was held at the President's Office.

Some of the residents' concerns include space constraints at the healthcare centre and harbour; challenges to cleaning and protecting the islands' wetlands and other issues stemming from them; and the need for a waste management facility and a children's park. They also asked the Vice President to expedite the planned development of a penitentiary on the island and discussed ways to address the most pressing social issues.

The Vice President assured the council members that he would bring relevant government agencies' attention to their concerns and continue to monitor progress. He reiterated the administration's commitment to equitable nationwide development, devoid of discrimination between different populations. The Vice President also highlighted the importance of working together to sustain ethical values and bolster the social fabric. 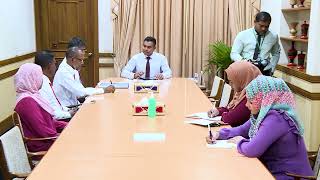