The Executive Secretary of the UNFCCC calls on the President At the meeting, Ms Espinosa said that the Maldives plays an essential role in climate adaptation discussions as the country has the credibility and the authority to take the issue forward on the global front. She also expressed gratitude to the President for the Maldives' strong presence at the United Nations Climate Change Conference of the Parties (COP26) last year in Glasgow, Scotland, and emphasised the importance of island nations being at the forefront of the climate movement.

President Solih stated that the biggest priority for the Maldives in the area of adaptation was access to finance and noted that proper coastal protection would cost more than four times the annual national budget. He was accompanied at the meeting by the Minister of Environment, Climate Change and Technology, Aminath Shauna; the Special Envoy for Climate Change, Sabra Noordeen; and the Minister of State for Environment, Climate Change and Technology, Khadeeja Naseem.

The Executive Secretary of UNFCCC is currently in the Maldives to participate in the ongoing Glasgow—Sharm el-Sheikh work programme on the Global Goal on Adaptation, held at the CROSSROADS Maldives. 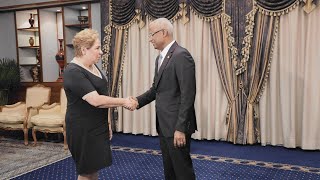