The New Ambassador of Kazakhstan presents credentials to the President On Monday morning, the new Ambassador of the Republic of Kazakhstan to the Republic of Maldives, H.E. Nurlan Zhalgasbayev, presented his credentials to H.E. President Ibrahim Mohamed Solih. The ceremony was held at the President's Office.

At a meeting with the Ambassador afterwards, President Solih welcomed him to the Maldives and congratulated him on his new appointment. President Solih noted that this year marks the 22nd anniversary of establishing bilateral relations between the two countries and emphasised that cooperation between the two countries has significantly improved over the years, including people-to-people contact.

Speaking with the President, Ambassador Zhalgasbayev highlighted that the two countries have a history of support and cooperation in various areas of mutual interest and the increase in the number of Kazakh tourists visiting the Maldives.

The President and Ambassador also discussed various topics of mutual interest, including establishing honorary consuls and increasing cooperation in tourism, fisheries, trade, and investment. In conclusion, the President and the Ambassador expressed their commitment to strengthening the long-standing bilateral relationship between the two countries. 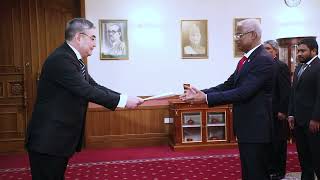