‏President Ibrahim Mohamed Solih on Sunday afternoon met with the management of Addu Equatorial Hospital (AEH) to discuss concerns regarding delivery of services. The meeting was held at the hospital.

‏The management of the hospital had briefed the President on their efforts to enhance and upgrade the services provided by the hospital and shared their developmental goals for the hospital's future. Some of the concerns raised by the management include a lack of medical officers and specialist doctors, difficulties in providing public health services, a lack of medical consumables and equipment, and other service-oriented difficulties encountered by the tertiary-level hospital.

‏Speaking at the meeting, President Solih said that Addu City is among the locations where the health-care system had to be upgraded to Malé standards. He assured to address the concerns raised by the hospital management through relevant government ministries and offices. The President stated that the administration was working hard on improving the wages of healthcare workers.

‏Prior to the meeting, the President and First Lady had toured the hospital. 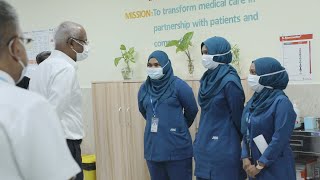