President Ibrahim Mohamed Solih on Wednesday met with the community leaders and residents of Holhudhoo Island, South Miladhunmadulu Atoll. At the meetings, held separately, the President listened to concerns about challenges to running Meyna School on multiple campuses and assured assistance in resolving them.

At his meeting with members of Holhudhoo Island Council and the Women’s Development Committee (WDC), the council members spoke extensively about the challenges facing Meyna School. They also raised other concerns related to housing, healthcare, sports, and the need for a more spacious mosque. WDC members brought to the attention of the President the difficulties they face due to the lack of dedicated office space.

President Solih said he would work with relevant ministries to address the concerns raised at the meeting. He also proposed dialogue to determine the best possible use for Holhumeedhoo Island, an uninhabited island under the Holhudhoo Council’s jurisdiction.

The residential community also shared with the President their grievances, including the need for housing and sporting facilities. The President went on to brief them of the administration’s developmental plans for the island. He also met with the faculty and parents of Meyna School to discuss ways to alleviate their concerns.

Later in the afternoon, President Solih officially inaugurated the newly restored and upgraded football grounds. He then joined the community leaders and residents to watch a friendly game between a veteran’s team from Malé and a team from Holhudhoo Island. He also stopped by the health centre and inspected the progress of the new extension building.

The President's visit to Holhudhoo Island is the final leg of his two-day tour of the South Miladhunmadulu Atoll. He is accompanied on the visit by some members of his Cabinet and senior government officials. 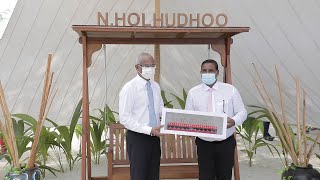 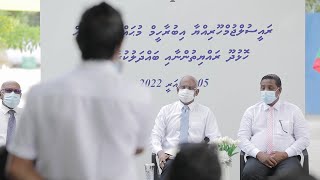 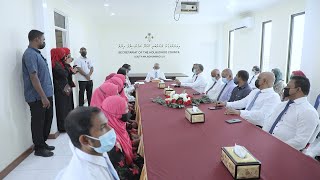 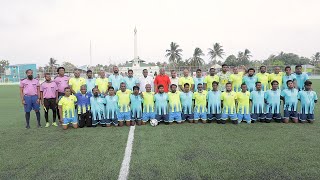