President Ibrahim Mohamed Solih on Tuesday afternoon met with members of the Manadhoo Island Council, where the council members expressed their contentment with the ongoing developmental work on the island. In addition to the developmental plans of the island, discussions at the meeting also focussed on the most pressing needs of its residents.

One of the topics raised by the council members was the need for road development. Since Manadhoo Island is the administrative capital of the South Miladhunmadulu Atoll, the council members noted that the island is frequented by visitors seeking a variety of services and spoke about the need to improve transportation facilities. Other issues raised at the meeting were related to utility services in the newly inhabited part of the island, healthcare, sports facilities for the youth, the ferry terminal, and the local market. The council members also requested the introduction of polytechnic programmes on the island.

Touching on some of these issues, President Solih informed the council members that the ongoing water supply network project would be followed by the road project and assured them that upgrading works and the development of an extension building to the Noonu Atoll Hospital would proceed simultaneously. He also expressed his confidence in securing the human resources required for the healthcare sector before April and assured the council members that the government would work to seek ways to address their concerns.

The President’s visit to Manadhoo Island is the third leg of his two-day tour of the South Miladhunmadulu Atoll. He is accompanied on the visit by some members of his Cabinet and senior government officials. 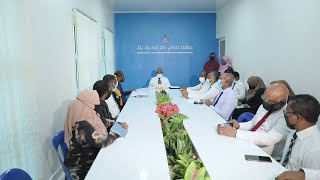