Speaking at the meeting, members of the council put emphasis on the role of local councils in working together with government offices and institutions to realise the targets of the administration’s Strategic Action Plan (SAP). They also shared with the President the developmental plans for the atoll and the challenges they face in discharging their duties.

Some of the main issues raised at the meeting relate to housing, the jurisdiction of local councils, waste management, ferry services, and healthcare. The council members went on to speak about the new opportunities brought about by the administration-led amendments to the Decentralisation Act.

President Solih assured the council members that the administration would work with line ministries to find amicable solutions to their concerns. He also urged them to ensure that their developmental plans are in line with those at the national level.

The President’s visit to Manadhoo Island is the third stop on his two-day tour of the South Miladhunmadulu Atoll. He is accompanied on the visit by some members of his Cabinet and senior government officials. 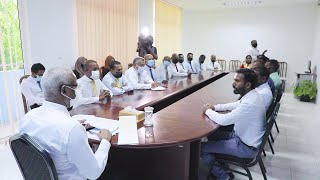