President Ibrahim Mohamed Solih has stated that his administration would continue to value and consider the public’s opinion and sentiment in carrying out urban development projects. He made the remarks while speaking at the inauguration of the new harbour on Landhoo Island in the South Miladhunmadulu Atoll.

Speaking at the ceremony, President Solih took pride in highlighting that two pledges made by the administration to the people of Landhoo were delivered today. He expressed satisfaction in noting that the new harbour on Landhoo Island was completed to the requirements of the residents.

Underscoring that the mosque that opened in Landhoo Island today had an initial capacity of 300, the mosque development project was later revised to cater for 500 people upon request from the residents. He went on to highlight several other projects planned for the progress of the island.

President Solih also spoke about the administration’s efforts to ensure social harmony. On the topic of drug abuse, he noted that the recently constituted National Taskforce is working restlessly to combat the drug trade and drug abuse, and that results would be seen by mid-year.

After the ceremony, President Solih opened the new mosque on Landhoo Island. The President’s visit to Landhoo Island is the second stop on his two-day tour of the South Miladhunmadulu Atoll. He is accompanied on the visit by some members of his Cabinet and senior government officials. 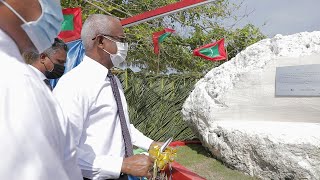