President Ibrahim Mohamed Solih on Tuesday afternoon met with members of the Landhoo Island Council and Women’s Development Committee (WDC) in the South Miladhunmadulu Atoll. Speaking at the meeting held at the Landhoo Island School, the council members highlighted that the administration’s decision to redesign the harbour of the island to cater to the wishes of the people is a testament to the administration’s commitment to serving their needs.

At the meeting, members of the council and WDC shared with the President their developmental plans for the island and its people. They went on to discuss some of the most pertinent needs of the people, including the need for a dockyard, sporting facilities for the youth, a proper waste management facility, an outdoor gym for women, and improving healthcare services.

Briefing the council and WDC members about the latest on the island’s developmental plans, President Solih noted that, despite a lengthy harbour development project, the administration accorded priority to delivering on the wishes of the people. Assuring them of expediting the project to develop a new football stadium, President Solih said the administration would seek ways to address their concerns.

The President’s visit to Landhoo Island is the second stop on his two-day tour of the South Miladhunmadulu Atoll. He is accompanied on the visit by some members of his Cabinet and senior government officials. 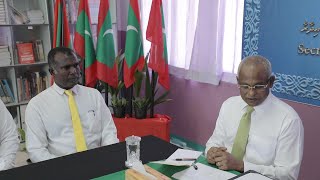 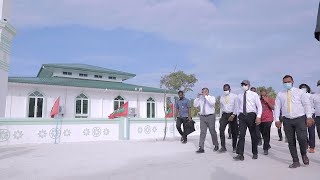