85 per cent of administration’s developmental pledges are underway, says the President Despite setbacks caused by the COVID-19 pandemic, President Ibrahim Mohamed Solih stated on Tuesday that the administration had initiated 85 percent of its developmental pledges. Speaking to the residential community of Maafaru Island as part of his two-day tour of South Miladhunmadulu Atoll, President Solih assured them that the administration stands committed to delivering its pledges.

At the meeting, the residents of Maafaru Island shared with the President their vision for the progress of the island and their needs and concerns. The issues discussed at the meeting include improving healthcare services, issues related to the island council’s jurisdiction, and concerns about the Maafaru International Airport. While conversing with them, President Solih provided insight into the island's developmental efforts and plans backed by the government.

The President noted that improving healthcare services in Maafaru Island is a top priority, especially since it is home to an international airport. On this note, he said the administration is working to extend the service hours of the health centre and briefed the residents about the project to develop a hospital there.

The President also touched on some other topics of importance to the residents of Maafaru Island, including improving school infrastructure and expanding the airport, including extending the runway, developing an airport hotel, and improving refuelling services and other essential services.

Speaking about the current Covid-19 situation in the country, President Solih urged everyone to be vigilant and cautious and comply with Health Protection Agency (HPA) guidelines on the circulation of the new Omicron coronavirus variant.

The President's visit to Maafaru Island is the first stop on his two-day tour of the South Miladhunmadulu Atoll. He is accompanied on the visit by some members of his Cabinet and senior government officials. 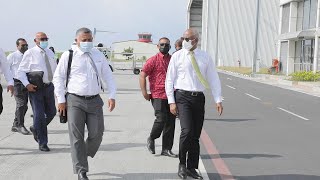